With the hot days coming back again, we are all thinking about what to eat. ‘Vichyssoisse’ is a French word which describes a cold leek and potato soup. Back to the 1917’s, this soup was the fruit of the imagination of a French Chef, Louis Diat, working at the Ritz-Carlton in New York to keep patrons cool! Since then, a few more chilled soups variations were added to his repertoire. People might be familiar with the Spanish cold soup, Gazpacho, made from tomatoes and peppers, but are less familiar with this very French version…

I am going to modify the original recipe a little bit as the original is a pure example of French Cuisine using butter, double cream and creme fraîche, which, although tastes delicious, isn’t quite so good for the waistline and heart health! My version, however, still retains it’s unique flavour but keeps it nutritions and healthy for us to have as a lunch or light supper. The fragrant and green colour of this soup is appealing as the nutrition and health benefits of eating leeks. Leeks are a good source of vitamins A, C and K, of dietary fibre, and contain minerals such as Iron (which is important for red blood cells) and Manganese (involved in the regulation of brain and nerve function).

This soup is really easy to make for a really good value, and lasts for days in the fridge.

It’s best to serve this soup just below room temp to enjoy the flavour from the butter, potatoes and salt.

Method: Wash the leeks and divide them in 2 different bowls – green parts in 1 bowl, white parts in the other. On a medium heat, melt the butter in a pan. Chop finely the white part of the leek and put them in the pan with the melted butter and a generous pinch of salt. Give a good stir and sweat the leeks with the pan lid on.
Meanwhile, wash and slice the new potatoes or Jersey Royals. Add them in the pan and season with salt.
Sweat the potatoes until soft. Add the crème fraîche and cook for a minute.
Add 1.5l of chicken stock or veg stock and bring to the boil for a couple of minutes. Add the green part of the leeks finely chopped. Bring to the boil again. Blend the soup until a smooth and green texture.

NOTES
2 great ingredients to make a fantastic soup for lunch or dinner to keep you cool.
The key part to get your soup green is to separate the green part from the white part of the leek.
Make sure to season properly the soup at the beginning to get the maximum of flavour.
If you fancy it, you can a drop of truffle oil at the end.

I am a professional chef based in London. I am still exploring the hospitality industry by using sustainable food and foraged ingredients to create dishes. Nutrition and good value are the aim for writing this blog. View all posts by fabcuisine 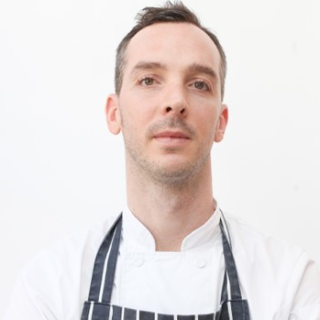 I am a professional chef based in London. I am still exploring the hospitality industry by using sustainable food and foraged ingredients to create dishes. Nutrition and good value are the aim for writing this blog.